Wow, I didn't even need to send a PM. NO rush, don't worry - whenever you've got a moment animations would be awesome

I'm having a bit of trouble reading the location of the horns. They seem to be sitting next to each other in the viewplane (same depth). Perhaps the closer one should overlap the rear one more?
Wesnoth UMC Dev
Stories of Tarlyn (on hold) - Era of Strife - The Dark Hordes
Top

Finally it is finished!! A single tear rolls down my cheek.

This is, so far, the single finest piece of pixel art for Wesnoth I've collaborated in making.
Thank you all for support, Jetrel especially!

But the work isn't done yet! I can't wait to see this baby animated by pixelmind.

I'd help, but with my level of animation skill, I'd be slowing you down.

Oh, and one little thing: since the smaller horn on his right was stumped, I figured the same should be done to the one on the left side as well. 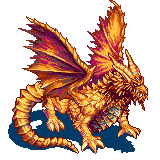 As far as the wings go, IIRC the unit doesn't fly anyway, so they could just be vestigial wings.
"I'm never wrong. One time I thought I was wrong, but I was mistaken."
Top

pixelmind wrote:That's one big bad dragon. Looks really great. Much much better than my version.

.
Work is busy as always and I'm currently working on my own animated short movie and game as well but I'll definitely sit down and try animate this wonderful dragon.
It may takes a week or two till I find some spare time though.

When we work on this, I'd prefer it get done as pure-pixel art; hopefully though we can distribute the work to multiple people on the team. Most important is that I think we can divide the labor. I think we've got several people here who would be good at detailing individual frames, but few people here who can animate reasonably well.

If you could block the animations, instead of trying to singlehandedly do them, I think we could split stuff up nicely.


I also have a few ideas - one fun one would be to generalize that funny idea you'd had about the dragon "snacking up" a goblin. Rather than flinging it over his head, if the dragon attacked the ground target with a big "chomp", and appeared to munch on it a bit like a snake or dog trying to wolf something down, I think the way the head would obscure the victim would mean it could reasonably get used as a killing blow against many small targets.
Play Frogatto & Friends - a finished, open-source adventure game!
Top

I imagine everyone will be happy to hear this one word: committed. I've removed the old unit graphics, because not only were the animations complete-and-utter-crap, but the base frame itself has some rather big issues; weirdness in shaping and perspective. I sympathize with those who hate to see decent graphics removed, but these weren't decent; they weren't up to mainline standards, and were the primary goad behind this replacement project.


Also, this unit officially stands as a hard example of our "upper-limit"; it looks like this guy just slipped under the wire in terms of size, but anything bigger in terms of the spacing of its feet, will cover up creatures in neighboring hexes. As it is, this guy currently has a number of problems meshing with cave/castle transitions. We can fix those in the code*, but we can't fix something being so big that it looks like it's stepping on someone in the neighboring hex.

This is what it looks like in game, surrounded by units. 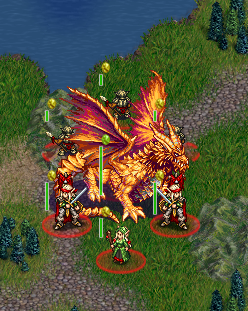 
*probably. Even in a worst-case scenario where we can't, we'll opt for the extremely common "16-bit" solution of artificially tweaking every scene such a "boss fight" occurs in so the boss actually fits in it.
Play Frogatto & Friends - a finished, open-source adventure game!
Top