I've finally got round to making a capture the flag scenario, as far as i'm aware it works, and it doesn't show errors, and despite my best efforts the ai doesn't seem to want to let it work, the leader will move to the places of the potions only once so it's best to play with players rather then the computer. It probably gets confused because there are 2 flags it wants to move too.

Basically, there are 3 players and then a ai, as giving the ai no_leader seems to remove the side i've had to give it a leader. Basically there are 2 players attacking and 1 player defending, it is in a cross shape, on the vertical cross, there are the flags inside the Dwarven castles. Blocking it from the middle is a line of cavewall on both north and south sections which has 2, 1 hex gaps. These are defended by watchtowers, purely to stop a 2 scouts rushing in and winning the game by turn 4. On the horizontal piece of cross are the two players also blocked off by watchtowers, in much the same way as flags are blocked. These generally get killed by turn 3 by the ai. But if you use berserkers then you done. And in the middle is the defender. He starts off owning all the villages, except the ones in the other sides sections.

If you can capture both flags (potions in this case for want off better graphics) you win, to show who owns them they change the colour of the potion, starting off from grey, they may change to blue or red depending on who owns them. If the defender manages to kill both players he wins, also the defender gets mores villages so no need for a larger gold bonus for the defender. So far playing with the ai, the defender has a slight advantage but i want to see how people fare. 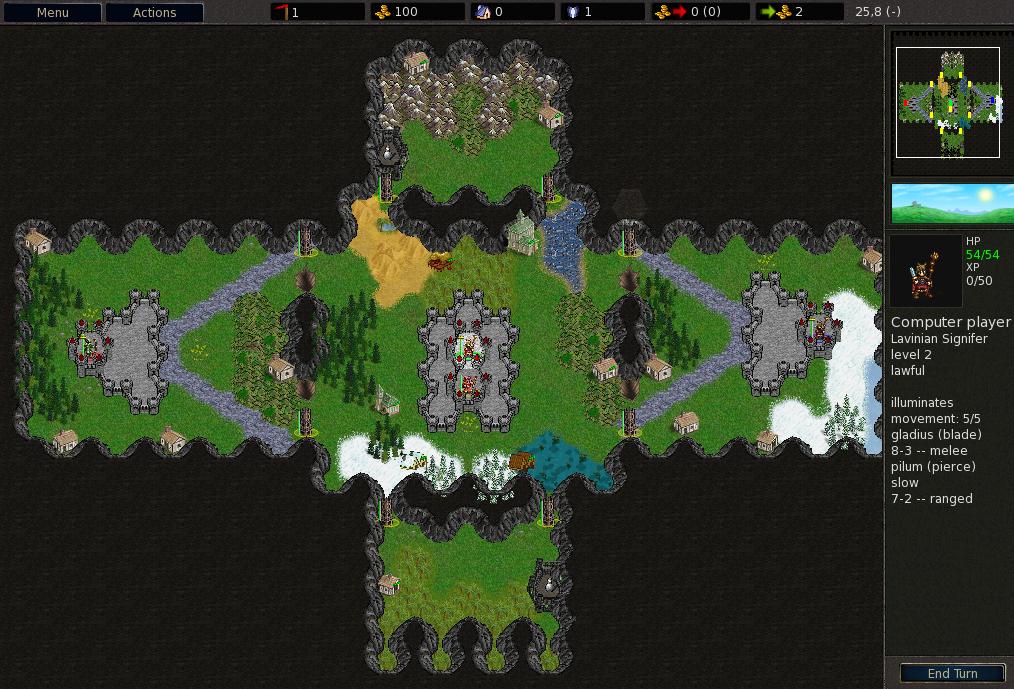 Last edited by Disto on September 3rd, 2005, 11:54 am, edited 1 time in total.
Creator of A Seed of Evil
Creator of the Marauders
Food or Wesnoth? I'll have Wesnoth
Top

Hey disto just tried it. I like it a lot. I probably will try it out in MP today. Your right even with all my efforts the AI is still not corroperating with this map.

darksteel wrote:Hey disto just tried it. I like it a lot. I probably will try it out in MP today. Your right even with all my efforts the AI is still not corroperating with this map.

Yeah the only practical place for the AI is the defender, i've got quite a bit of code in to tell it what to do but i think 2 objectives is hard work for too understand, perhaps i can try to get it too protect the flags....., but it's hard work.... I'm going too make a few variations sometime, just a 2 player 1 will probably be easy, as i can just take out the defender, and a variation would be each player has 1, which they have to defend and then nick the other players. Do you know whether the flag code works, my biggest worry is that, it might now change the flag.... But i'm gonna play a couple of games of it now....

edit: Woops i need to download the new version....
Creator of A Seed of Evil
Creator of the Marauders
Food or Wesnoth? I'll have Wesnoth
Top

Ok i've made 2 player, and 4 player versions to go with the 3 player one, the 4 player 1 i runs and i know will play fine, just i don't know whether you'll be able to win it, as coding 4 different flags you need captured is something hard. The 2 player 1 works fine though and i'm looking forward to see what you think, i can't upload screenshots as my bandwidth is taken up downloading Wesnoth.

I can't make more players as their are no more flags to be used.
Creator of A Seed of Evil
Creator of the Marauders
Food or Wesnoth? I'll have Wesnoth
Top

As you can now get it on the campaign server i've removed the attachments here. And as i'm starting to tire of doing Wesnoth i'm going to take a break. But it is just sooo... frustating.

I've done some balancing and now on the 3-player 1 the leaders are ressurected, so they don't win by killing everyone else. Except if the 2 attackers die the defender wins.
Creator of A Seed of Evil
Creator of the Marauders
Food or Wesnoth? I'll have Wesnoth
Top
Post Reply
5 posts • Page 1 of 1