Hi Bob, thanks for the new version. I can confirm that most of the issues we met in version 0.1.0 are fixed now.
It seems the bombs are erasing the book image (which make sense) but the recon can still be done.

These are some really great additions in the new version. The new free units are really special and it makes us want to "catch them all"

About them two issues: Again none of these problems prevent from enjoying the campaign which is really fun.
They might even been already fixed in your version!
Good job from you and jb. Cheers.

Figured I'd look into Wesnoth again after what feels like a decade... Glad to see you're still making maps!

I ran into a bug where a prisoner couldn't petrify himself, gave a bug saying the lua code specified 'adjacent'
If enough people bang their heads against a brick wall, The brick wall will fall down
Top

Wow, welcome back Weeksy. That's a name I thought I'd never see again! I'm pleased you came back, and jumped straight into playing this. I hope to catch you online for a game...

Thanks again for the saves. Both those problems will be fixed in the next version.
My current projects:
MP pirate campaign: The Altaz Mariners
RPG sequel: Return to Trent
MP stealth campaign: Den of Thieves
Top

Cool! Another little issue about prisoner:
First save, including the recall list, the second one the save of the scenario the unit was charmed from.
You might have noticed that already! Cheers.

Fun with bombs before it disappears

There is a brand new update to this campaign. Den of Thieves 1.0 is now available on the add-ons server. You may notice that we've skipped a few numbers (the last update was 0.2), but this is because we now consider the campaign to be stable, polished and more or less complete. However, that's not to say that we're going to stop working on it!

This new version incorporates numerous tweaks and bugfixes (including many suggested by players) and a few major rule changes. We've also drastically expanded the number of scenarios - there are over 80 randomised maps now! Here's a summary of what's new...

Loot Drops
Previously, if you killed a royal captain you'd find a key. Now captains drop randomised loot: you may find a key, or a potion or a flower. The key works as before and allows you to unlock any door. The potion doubles the drinker's movement for a turn, allows them to ignore ZoC and gives trap immunity (this is similar to the old sprint ability, which has now been removed). The flower allows you to become invisible for a turn, on any terrain, at any time of day. A unit can only carry one item, and they are all one-use.

Bombs are Back!
We felt bombers were not holding their own, so we've changed the way they work. Now you detonate bombs by rightclicking on the bomb itself, rather than the bomber unit. This allows you to blow them up individually, as and when you want. It's also possible for a player to detonate a bomb planted by another player. Again, this adds flexibility. In addition, bombs no longer alert every unit on the map. Instead, only royal units within 3 hexes of the explosion are alerted. This allows you to use them much more freely and creates more interesting opportunities to blow stuff up. Watch out though, royal units are also alerted when they move adjacent to rubble caused by a destroyed wall...

Extra XP
Your units are now awarded extra XP in the mission report for disarming traps and breaking alarms. This adds another mini objective to each mission, as you have to weigh up whether it's worth taking the risk to properly clean up the royal defences.

Optional Game Modes
Finding the game too easy? Desperate for a longer campaign? Well, now there is a 'hardcore mode' which raises the difficulty level substantially and sets the renown target at 15. This can be enabled in the 'custom options' tab on the game set-up screen (see the screenshot below). There is also an option for those roguelike purists who would prefer their starting units to have randomised abilities.

Any problems, let us know. We shall continue to add new maps - and all game ideas are welcome. Happy thieving! 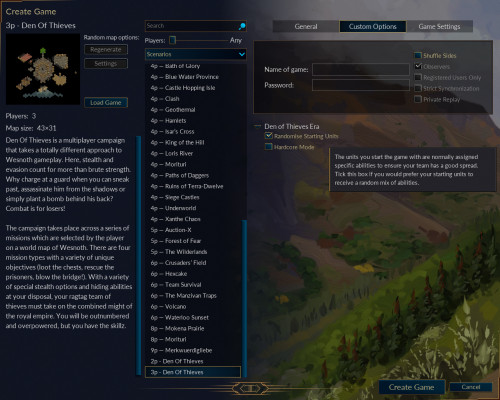 These game modes are found under the 'custom options' tab in the game creation screen. 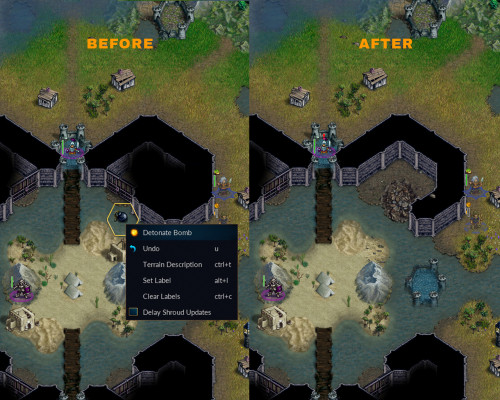 Bombs are now detonated by rightclicking on the bomb itself. Notice how the sergeant is alerted (because he is within 3 hexes), but the Heavy Infantryman is blissfully unaware.

Stumbled upon a kind of a problem (if it's not intended ofc). Rescue mission, the prisoner is a dune burner with 28hp locked in a prison with tentacles, they kill him right on the second move and we can't do anything about it
Top
Post Reply
52 posts