I had previously thought that changing orcs' keep into an impassable wall was a better choice but after doing it in the map editor it looked much worse - even not worth a screenshot - so I vote for Mint's version.
My Ladder of Wesnoth profile
I currently maintain the Polish translation of The Battle for Wesnoth.
Jeżeli jesteś polskim graczem, dołącz do wesnoth.com.pl
Top

I don't know, i like the second one. So I vote for Horus2's version.
Mint's version just doesn't fit to the atmosphere of the map.
"A lion doesn't concern himself with the opinions of the sheep." - Tywin Lannister
Top

The reason for those mushrooms in the central region of the map were to weaken the cavalrymen and horsemen of the loyalists, as well as to give a boost to skeletons. The speed and power of the horsemen and cavalrymen on this map is quite impressive, and the undead have trouble since they're so slow, so it's a good terrain for a mix of buff and nerf, not that those two extra mushrooms made a huge difference. The extra break in the impassable does also negate the slowing effect of the mushroom on the horses. Orcs are also nerfed from this, but that is not such a big issue. It is nice to see some interest in the map

Some time in the future it may have a redesign to make the map asymmetric, as currently P1 has quite an advantage since there are is odd number of villages while the map is mostly symmetrical.


With the Walls of Pyrennis, it's a little less obvious from how Horus cropped those screenshots, but my intention was also to change the passable orcish castle block at (16,17) into snowy encampment, since this also provides a better contrast, and this can just be seen from the screenshot. This does interfere with the theme of the map, however there are already human snowy castle hexes dotted around the map, so I think it's still not too far out of place. This extra block of castle is also why I had the raised keep instead of the flatter keep mix I think Dreadnough is suggesting. If the flatter keep was used I feel it looks too similar to the other block of castle.
Top

A classic map has seen some changes which shall be finalised some time soon, this time Fallenstar Lake.

The main focus of the changes were to make the map less campy (200+ gold banking is not unheard of), as well as reducing what is so much of the time a death sentence for the one who attacks first. An extra gap was added to the impassable mountain line, so now it is not so trivial to put up a overly strong defensive line. The castles were also shifted slightly, and the terrain around the mountain villages shuffled to nullify one of the 6mp leader advantages. I dont understand how ladder games even exist, everytime i join online its seems impossible to find people to play ladder. I dont even ever find any active ladder game.
Top

Well, they do exist. If you can't find any, they are usually played on 1.12 official server and the most often in UTC afternoons and evenings. Here's the game history of ladder: http://wesnoth.gamingladder.info/gamehistory.php
My Ladder of Wesnoth profile
I currently maintain the Polish translation of The Battle for Wesnoth.
Jeżeli jesteś polskim graczem, dołącz do wesnoth.com.pl
Top

Fosprey wrote:I dont understand how ladder games even exist, everytime i join online its seems impossible to find people to play ladder. I dont even ever find any active ladder game.


just name a game with 'Ladder' in the title and check to see if your opponent that joins has a ladder account
"There's no love in fear." - Maynard James Keenan

Of course I join and create a game that says ladder, nobody ever joins, or i can find anyone playing a ladder game, everyone is playing survival maps.
Top

there are only 44 active ladder members unfortunately
"There's no love in fear." - Maynard James Keenan

The proper way is to learn the name of the regular ladderers, and whisper them when you see them; they will be happy to accept your offer. The other common alternative is to join the observers of an ongoing ladder match. Every worthwhile ladder game has at least 2 players watching it, so it is the best meeting ground to arrange the next. It has been going this way for years.

Today i made a multiplayer modification called "MirrorMate", which is the remedy for the many mirror matchups that are discovered only after 3-4 turns of serious business. It does not prevent it, but warns the players so they can restart instantly. It seems to be bug-free and works with Sandbox Map Picker flawlessly, althought for default era only. If you are a ladder regular, i don't think that i have to praise it for pages long to make you understand the importance of this. You can download it from the add-on server.

Remember the analysis of the first hundred acknowledges games on Ruphus Isle? I am back with 40 replays, and new numbers to crunch! The 140th game was a major turning point, and below you can read why.

image of the map: 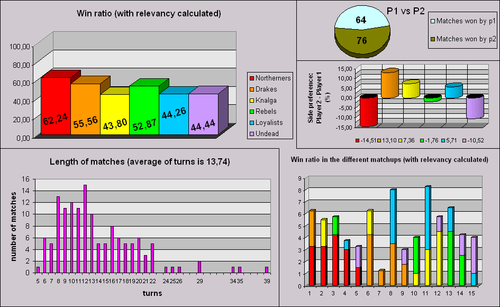 Horus2 wrote:Unfortunately, the previously solid P1 vs P2 comparison pie chart shows a small bias toward P2. Maybe the mathematicians can tell if this is still in the domain of standard deviation.

Assuming the map is perfectly balanced, the chance of getting a bias that high in 140 trials is 35%.
Top

It doesn't surprise me in any way that knalgans have a weaker win rate in general, despite them being my favorite faction I've never felt that they were exceptionally strong with the exception of the undead match-up issue but I'm curious about your assertion that you think that that's a good knalgan map. To me it looks like the knalgans have a few advantages early but once the map starts to saturate, the central front looks like a nightmare for knalgans to mount any pressure.

Of course, that is a frequent issue that knalgans have on many maps so it could be viewed as a faction imbalance.
"There are two kinds of old men in the world. The kind who didn't go to war and who say that they should have lived fast died young and left a handsome corpse and the old men who did go to war and who say that there is no such thing as a handsome corpse."
Top

Perhaps it happens because p2/south has smaller ability to move units from one side to another in defense which makes slow dwarves suffer. Maybe I'm not as experienced as you and most of other ladder players, but in my opinion Ruphus Isle isn't the best map for Knalga because of the wide front, and like Velensk said, such things often happen to Knalga on bigger maps.
My Ladder of Wesnoth profile
I currently maintain the Polish translation of The Battle for Wesnoth.
Jeżeli jesteś polskim graczem, dołącz do wesnoth.com.pl
Top
Post Reply
83 posts