I kept the previous lists.

This causes OOS because sometimes an enemy unit is dead and other player sees them as alive.
My MP campaigns
Gobowars
The Altaz Mariners - with Bob the Mighty
Top

@Ravana: thank you. it is already implemented, but i though i knock a map together before i upload it

(after all, i have a map (need a bit polish still though), units, and a concept),

@jb
hmm, i have no explanation for that though.
blessed special doesnt change the amount of damage


maybe it is the ID which interferes with something?

or explanations? is the attack-special itself buggy in MP?
The best bet is your own, good Taste.
Top

- fixed dreadful-sight wml error and some other abilities that slipped trough
- fixed size of some strings in shop menu
- fixed "type" to be displayed when bosses dropp items, instead of showing the "name"

- berserkspecial got changed (old: 15 rounds and +20% damage) --->
10 rounds of fighting, +80 damage dealt and +50% damage taken. which is the equivalent
of the former version, but faster to calculate

(just making things consistent)
The best bet is your own, good Taste.
Top

btw, from my playtests so far:
version 1.12 is a success for sxrpg gameplaywise. the battle calculations seem to have speed up significantly.


also, some nice ideas came into my mind, to make some enemies nastier.
for example high-tier enemies with death-aura, may get an improved ability, that will damage the player upon ENTERING the aura.

of course there may be different version for the death aura. (with different damage-types)


i think i will wait with further uploads until the new map is finished, or some bugs pop up that need an immediate fix.
The best bet is your own, good Taste.
Top

Leendert wrote:I like to thank Mabuse for ever create sxrpg maps!! Now back in 1.12, GREAT!!!

Yes, and a new map is in the making
its a small, crispy map

The bug with hex. making you loosing HP (more than 200!) without any reason is still active on EvilDead on same locations.

I have appreciated a lot the new way to drive "chance related to dropped items" (currently i'm spending the money to put this number on 20%), and also the new way berserk is set, i need to test this.

I was also surprised by the commentary when choosing a map, only for ToB the recommandation is for "3 to 5 players", the other one being recommanded for "1 to 5 players", is this a simple typo or real? I'm in a hurry to verify that ToB is currently "doable" with 1 unit

Hey, cool to hear from you.

Yes, the move-attack thingy is related to 1.12. However, the calculation times are done a lot faster in 1.12, which is very useful in higher game stages (and also useful for new, maybe bigger maps), so once you get used to move first then attack it is ok. anyways, cant do anything about it.


yes, i also found that hex-bug. but wasnt able to find the reason for that. on that location is (as far as i know, not brazier or fire or whatever. but this can be the only reason - i guess there is maybe a brazier OUTSIDE the map and this location is chosen then.
you can provide perhaps again the coordinates. i wil track down that bug sooner or later, or simply make the hexes inaccessible until then

im thinking about limiting the item-drop percent a bit, becasue it is too risky if a newbie spend too much money on this. maybe a maximum of 40% is good. what you think?


well, yeah, there are quite some texts that need a little bit of an overhaul, also like the "basic-how-to-play" section at start. in any case by the time it was wtritten it was considered as impossible to win ToB with one unit

in any case, im working on a new map, and also some Boss-battles will become harder on all maps.
enemies with death-aura now deal damage when you ENTER the radius of the unit, luckily resistances apply

(so all proves wether a map is doable by 1 unit only will only be registered for the upcoming 5.0.0 version)


the new version with the new map may be ready later this night or in the early morning (more likely).
its a remake of my 3rd SX map ever, "Isle of the Dead", which can be found in the SXC-Package

however, it is now called "IsleOfDread" and will be quite different.

- deathaura special will now also do damage upon entering the aura, this can happen more than once
- new ability 'stenchaura', is like deathaura but will also poison the player


- warriors-CLASS can buy the 'BOTH STRIKE' special without any price-penalty, but they require a net for it
- warriors-CLASS can only add 'slow' to ranged weapons unless they have not bought a net yet
(this was just dont to prevent players from buying senseless things, if a warrior has a net, he dont need
to upgrade other ranged weapons with slow. if a warrior want to upgrade a ranged weapon with slow, he dont need
to buy additional strikes, since it only makes sense for 5+ strike weapons anyways to get upgraded with slow.
But if a warrior has a net, he can buy a both strikes option to improve it to 4 strikes -
and this option got effectively cheaper by -60 Gold)


- In Inventory and Shop Number of current potions is highlighted displayed

- new units include one kind of new shroom, which affects all maps

so only here and there some tweaks, shop-wise

the main enemy wise is the deathaura ability, which quite some units had, these are now very dangerous

and finally a new map! features new terrain and new monsters.
its a small one, so you can play it quicker than usual, let me know what you think about it.
The best bet is your own, good Taste.
Top 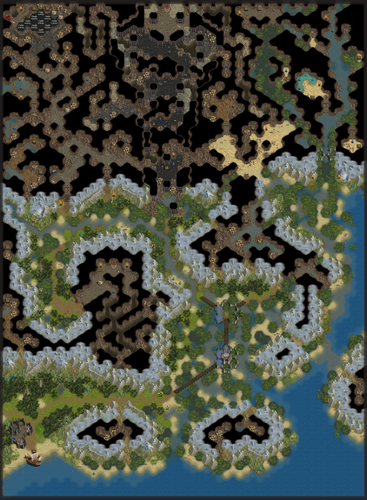 hey, well im glad how the map turned out, although after all, it may be better if there were more hexes for the upper part in hight/wide. but its cool to have a small crispy map.

back in the days, the island map was the biggest as my first two maps, were stricly 40x40 since all SX maps had that size when i played sx the first time.

i find the map kinda hard and died all the time so far.

so yes it is like "you entered an SXRPG map and now its your problem".

in the meanwhile a small update:

"IsleOfDread"
-------------
- Spawned bosses for AI8 are now more mobile in caves on "IsleOfDread"
- Nagas from AI7 have slightly reduced speed (wont get a speed upgrade)
The best bet is your own, good Taste.
Top

Update:
In short: SIGHT-VISION was introduced, highést vision-sost for ANY terrain (also unwalkable) is 3.
Quick-trait can reduce this to 2. This was made so non-flying units can also look a bit into chasms.

2 Items got fixed. The illumination-Aura had no Effect at all, also the Undead Book had no Effect.
(no effect other than the aura was displayed, and the unit was "marked" as undead, but had not the status "non-living". So these should now work fine.

Also a recruitment-Bug on the new map was fixed.
The big maps got a bit more gold (+600 gold in the map) to make the player dont need to farm on gold so much. However, this only applies very late ingame

And the other got some slight cosmetic changes. HF

- All units have now Vision cost in any terrain of max 3
That means, regardless of your movement, your unit will always have a vision-cost
of maximum 3 (if better moves then better vision).
Even for unwalkable terrain. That means ground units can look a few tiles over chasms for example.
Or over deep water.

- fixed logic-bug for "Book of the Dead" Item. Now PLayer is really undead and cannot be poisoned
or drained