The character graphics aren't done, so there is no chance to get an image of him. It is not necessary yet, and having the code working is more important.
The healing when nothing is done (actually, you are healed if you don't attack, you can move) is 20% of max hp. And yes, it should be shown, I forgot about it. I also forgot to disable the usual +2 hp.
For testing purposes, I have delayed writing the code limiting you to use only one weapon, one helm, etc. I am still writing only what is absolutely necessary for writing scenarios.
Flaming sword is working, it is just not shown in the damage screen, but it really damages the opponent.
Cheating for exp is okay, I would say it is absolutely necessary at the moment, I will block it when it will be the right time.
The other things are really bugs. It should not be possible to place two same enchantments on a unit (the new one should dispel the old one), melee weapons were not supposed to affect ranged attacks, spells used as standard attacks should take mana as well (I remember they were taking, but something went wrong probably).

P.S. You can advance in more classes to test it in an easier way, and I recommend you to export the character so that you would have it after an update (that standard reloading won't fix).
I named your units.
Top

Ok, I didnt understand how the exporting works but ill try it out.. is there any possibility to play a multiplayer game with that hero? I mean you have made a multiplayer scenario for your other campaign and if it isnt much work to fuse them I think it would be a good idea. Then you would have a great testing campaign as there are tons of monsters and even an interesting storyline. (I am talking about LotI Hordes of the other World)
Top

I don't know how good Hordes of the other World was, I have never received any feedback. Anyway, this is absolutely different and incompatible with Legend of the Invincibles' code (not even a line of it is in the code).

The scenario in this add-on is both SP and MP, you can load it in multiplayer (I think), and the code is written so that it would be playable in multiplayer (multiplayer is a priority). At the moment, hotseat multiplayer should be unchanged, but networked multiplayer is totally junk, because the GUI windows are shown on all computers and everyone has to select the same things or it will produce an OoS.
I named your units.
Top

I found another "bug" or even 2:
the first thing is that you can mutliclass as much as you want(or atleast 3 times, didnt try the unfinished classes). Furthermore you dont see the class (only the race) in the character properties window.
And the second is that after I lvled up a few times multiclassing all 3, this happened (picture) when I tried to lvl up as Hunter (I have 2 levels in barbarian + fencer and 1 hunter). The problem was choosing "Long range shot". (Idk why but after testing that was the one thing to cause the mistake).
And yes it works fine in multiplayer, hot seat 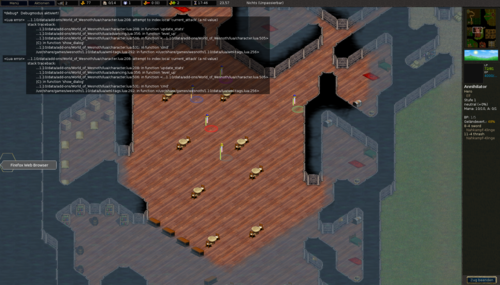 I have put no limits to multiclassing, because all skills you can get are limited by class level and many higher levels of skills (especially those who should not be available to multiclassers) are limited by level too. But it was discussed that some minor attribute penalties might be added.

The problem is that the unit has no default ranged (bow) attack. Any idea when did it disappear?
I named your units.
Top

I have no idea. However I noticed that the long range shot doesnt work s a spell - of about twenty rounds it didnt hit at all. And as the usual attack it has 70%+ dexterity bonus (or i think its the dexterity bonus) hitchance
Top

When I was trying it, it worked as a spell, with a fixed 70% chance to hit. I will have another look at it.
I named your units.
Top

Okay, I have coded the first 9 skills of rogue (only available skills till level 7). Note that weaker kinds of poison will not work on undead, that are all over the scenario.

Other bugfixes/changes:
Long range shot had a very low chance to hit, it was fixed.
Magic modifiers on weapons no longer affect weapons of different range.
Two identical enchantments on a unit are no longer possible, the stronger one will replace the weaker one.
Unavailable skills except those I plan to code will state 'error: missing description' if you click on them to let you know it.

Made the first 9 of Wizard's and Cleric's work. One more class and all classes will be working properly until level 7, and I'll be able to create other stuff to make it well playable, like item shops or character graphics.

The files were uploaded to wesnoth-umc-dev, but because I am quite sure nobody uses it, I am uploading it here too.

World_of_Wesnoth.zip
Necromancer's skills are not working yet! Known bug: fire blast spell does not seem to work and I don't know why and didn't have the time to debug it.
(2.25 MiB) Downloaded 108 times

cool, soon it will be playable and already have quiet a lot feauters
Top

Coded the first 9 of necromancer's skills. There is still a plenty of things that are not done or bugged, but pretty much all things are done in a restricted, somewhat a bit working, unfinished way. I was unable to commit the update to subversion because they changed something (I can still find the files, but no idea how to save something there), so I am posting it here.

I somehow wonder why this is project is so underrated.. Meaning that the Idea is probably one of the best here.. and it is nothing impossible.. but still only very few people are interested
Top

All the thought-to-be-impossible things are more or less done already. The only remaining challenge is the networked multiplayer.

But Xudo seems to have received a call to arms and Heindal is busy, so I am the only one active at the moment. Heindal was a perfect person for the scenario stuff, he loves this RPG quest stuff and knows to make it, just that real life issues are keeping him busy. I am pretty much awkward for making RPG scenarios, because I prefer the usual style of scenarios, and aim towards it , that would be unfit (if you have played the 9th chapter of LotI, you know what is my favourite style of wesnoth RPG scenarios, not RPG enough). I believe that once that I finish the flaws and bugs in mechanics, make some basic character graphics, a few scenarios get completed (need some help here), an alpha might be released to attract potential collaborators, but till then... an RPG scenario designer is needed. If everything fails, I will have to ask a few people directly, or, do it myself. It is not hard to do, it should be doable by anyone who spent a day learning WML, easier than coding the mechanics by far.
I named your units.
Top

Good job, keep it up!

I glad to see this project in active development.
Sadly I still can't join you. Because I called up into the Russian army. I'm going to return to you after 7.5 month.
Top
Post Reply
548 posts