Hey, I'm working on a massive 9-player map designed to emulate the feel of a dungeoncrawler/roguelike for people who don't have the massive alien superbrain required to play the latter. You play as a group of Loyalists in the center of a gigantic dungeon with tons of interconnected chambers. Houses are extremely scarce, except at the bases of your enemies, where they're plentiful. Currently it doesn't have any speed problems despite its massive size, but does anyone have any requests?

A few other details:

Currently I have it so that the 8 enemy groups (4 undead and 4 northerners) are all on different teams from eachother, and thus fight eachother. Because I set the XP cost to low, this means you'll still encounter leveled up units even if you don't let any of your precious few allies die.

Currently the day/night system still works, which means that the illuminated areas of the dungeon cause lawful units power to range from 0% to +50% while in them, but considering the fact that the player is at a massive disadvantage and can't really get new units, i figure I might keep it that way.
Top

Can you post a screenshot of the map?
My_Own_Minion: get rid of the scientist, i can take the blind guy

Sure. It's still a work in progress, and it's fairly large, but here you go: 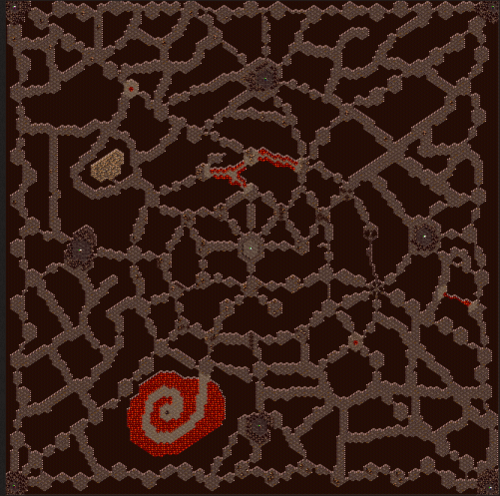 Image of the beta map so far.

I suggest you check out the Fiery Menace campaign:
http://www.wsrsw.org/addon.php?name=Fiery%20Menace
(Click on the image for a larger screenshot.)

It's on the 1.6 add-on server. This means you have to download the package or connect to add-ons.wesnoth.org:15003 from the game. Then edit the .cfg files and change at least the preprocessor symbols ("@" to "~") and the add-on directories ("campaigns" to "add-ons"). It's not much work.

This campaign is quite unknown - I think, but I thought it was interesting, because objects can be picked up, wielded and dropped. It reminded me of Lure of the Temptress, where the player starts out in a dungeon cell with hay on the floor (see east section o/t map).
Top

Alright, I did my first real test run of the beta map. Here are my notes:

Since the last time I posted a picture, I reduced the number of villages and castle tiles in each of the 8 bases to 3 each, then scattered around 20 or so villages throughout the dungeon.

I used the ascendance era. (Massive props to ancestral for making that, btw. you deserve 1 billion dollars and infinite girlfriends. Or boyfriends, whichever you prefer, not sure what your gender/orientation are.)

teams 2 and 3 each had 2 northerner and 2 undead armies. I was loyalist, with a male white mage captain.

I maxed out their income bonus, and minimized mine. I gave myself 200 gold, they each got 100.

I turned on shroud and fog of war. The former was to encourage exploration, the latter to speed up the 8 computer turns by not showing the battles not involving me.

and finally, I made the villages worth 5 gold each, and set the XP modifier to 30%

Not too much of note happened around the beginning. I recruited a fencer, soldier, heavy infantryman, cavalryman, mage, and bowman, and headed north, towards the lava pass. I started running into enemies around the 10th turn or so, When I sent my fencer to capture a village northwest of the lava pass (1). The ten turn wait is something I wish I could shorten, but it's been a problem since i first tried the map, so my hopes for its improvement aren't high. For some strange reason, once I captured the village, (1) the orcish enemies from player 9's army no longer expressed any interest in the spot. Indeed, at first, enemies expressed little to no interest in attacking my lone fencer, which allowed him to rack up a level or two before they deemed him enough of a threat to attack. Sometimes they even ran AWAY from my units. This is something I would certainly like to fix, if I knew how.

The 30% XP modifier seems to fit perfectly. I wanted the game to get harder, not easier, as the number of remaining armies dwindled, and I achieved this by having a low XP modifier, and pitting the enemies against each other, not just against me. This combat allowed enemies to level up their units without fighting me, because my units were in very short supply.

It worked. More than I could have hoped for, actually... but in some ways, perhaps... too well...

The armies did indeed fight each other, and plenty of units leveled up. The thing is, for some reason, team 2 (players 2, 3, 4, and 5) absolutely routed team 3 (players 6, 7, 8, and 9). it was an absolute unanimously one-sided slaughter. I don't know how it happened, since I didn't see too much of this, and it really defies credulity. A complete perfect rout? But the sides had an equal number of starting funds, income and castle spaces! I can only conclude that the edge positions have a positional disadvantage to the corner ones. Whatever the cause, however, the fact remains that the edge armies were the first to fall. To the best of my knowledge, player 9 was the first among them to go. I actually felt genuine fear when I sent my level 5 fencer towards the player 9 army base, only to find the keep abandoned, the villages flagless, and only one nearby unit...

Never before have I felt pity for an opponent, much less a computer-controlled one.

Were it not for save-scumming, my silver mage would've died there. That... that THING... it was strong enough to one-shot my mage! at full health! Although it WAS night time.

And this wasn't an isolated case. not by a long shot. Dozens of such leveled up units revealed themselves, but the trolls were by far the most dangerous. For the purposes of this map, it works just great, but as for ascension's multiplayer applications, I feel that the trolls are way too overpowered, unless it takes more experience. I didn't see how many beasts they killed, after all...

One of my biggest worries was that the game would become a cakewalk once I got my hands on an enemy base. Fortunately, this was not the case. Even with a base under my control, and even with the beefed up income bonuses the villages provided, I found i could only recruit a few more units to my side before I found my profits to be once again in the red.

I don't know what the general opinion is regarding silver mages, but I suspect that they're looked down on as a useless gimmick class.

Well, let me tell you something: In this map, they are CERTAINLY worth getting. Their ability to teleport between villages can be a lifesaver, and there's simply no other viable candidate for what you should make your leader on this map. Teleportation is an extremely useful ability for your leader to have, as it lets you travel between various spots under your control at will.

Let me take a moment to state that this is a very long battle. I estimate that a successful run of this map once I finish creating it will take the length of a small campaign. However, I'm confident about the entertainment value this map holds, especially once it's complete.

It was around turn 100 that the team imbalance started to bite me in the ass. With team 3 completely eviscerated, team 2's only remaining target was my little ragtag group. the result was an all-out slaughter. i was surrounded by four armies from all sides, and my prized level 5 fencer, who until then was completely capable of defending a base on his own, was swarmed, and eventually killed.

The team power imbalance issue has to be resolved, and I feel the best way to do this is by eliminating the team thing altogether, making it a free-for-all. With everyone fighting each other, I suspect the leveling effect will be even greater, and the difficulty curve will be more gradual.

I'm going to add more terrain features, and see if I can improve the army bases' defenses slightly, to prevent the teams from being routed too quickly.


Alright, that concludes my report. Any feedback would be appreciated! 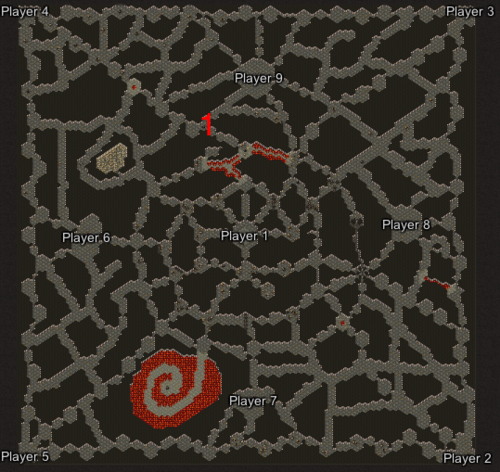 That's a lot of text with a lot of (not that relevant) details.

I think I'll just wait until it's finished, then play it and maybe give feedback.

ah, yeah, it's a lot of text, but I thought I'd write it down, in case somebody wants to offer advice.
Top

Hey, does anyone know how to speed up enemy turns when the enemy isn't visible? The 8 enemy teams take about a minute total to move once their armies are complete, and it's gotten fairly annoying. Is there something I can do to fix this?
Top

You can do what Wesband does and petrifies them (look up the tag [petrify]/[unpetrify]) and then unpetrifies them when a player gets close enough. Actually, Wesband does something way more complicated than that now, but that should get you started.
http://www.wesnoth.org/wiki/User:Ken_Oh
Think Wesnoth's RNG is unfair/biased/wrong? Click here.
Top

oh, thanks, but I can't use that. the point is that the factions fight eachother, allowing them to get stronger as the game progresses, making the game harder rather than easier the farther in you get.
Top

It ONLY takes 1 minute. Wesnoth AI gets slower as the size of the map increases, probably at least polynomially.

Take a look at the WML AI options. You might be able to sit around and tweak them a bit, but then again all of the options may simply be in-appropriate.
Top

On a large map with a lot of AI, one minute isn't long. However, I think 1.8 has seriously improved the speed of the AI, so that could just be 1.6 bias.
My_Own_Minion: get rid of the scientist, i can take the blind guy

so, if I had those kinds of waiting times with the final product, that wouldn't annoy people?
Top

Well I don't know about THAT! Hehe, you can never underestimate the shortness of people's attention spans. No offense intended to anyone, but quick play is usually best.
My_Own_Minion: get rid of the scientist, i can take the blind guy