I just finished the "must have" features of my Tower Defense game based on Wesnoth resources. It's not well balanced yet. Maybe after some reliable feedback I'll adjust it

Due to DNS issues (on Opera Turbo and some ISPs) you can use this link: http://jasonuniverse-hrd.appspot.com/st ... er_Defense 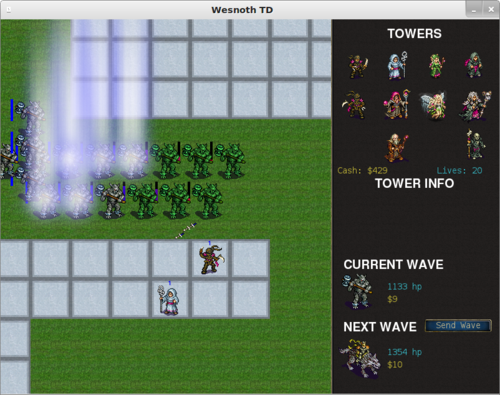 Screenshot from the game

I found it pretty fun. My main problem was that it was too easy. With a setup I got by the 8-10th wave I could pretty much beat the next 20 or so waves. When I began upgrading and buying new units I could have 5-7 waves on the screen at once without having to worry about losing or worrying about strategy. Eventually, after having about 7 waves on screen for 5-6 rotations I managed to die. I realize this is meant to be a rather simple game, but upping the difficulty wouldn't hurt. A little more variety in enemies, or more specialized abilities might be fun as well.

Other than that, nice attempt.

On the mechanical side, it would be nice to be able to move around the screen either via arrow keys or by clicking the middle mouse button (like wesnoth) its a bit of a pain to do manually.
Current projects: Arcane Defense (MP Scenario), Cavanagh The Conqueror (Campaign)
Top

not bad, adding more variety would be nice. like terrains, more enemys and towers and so on. The shyde is more then just overpowered with 4000 damage, i believe it should be 400
Creator of Dawn of Thunder and Global Unitmarkers