Forum rules
Before posting a new idea, you must read the following:
Post Reply
33 posts

What about a laurel wreath?

Don't forget that currently units can have overlays; would that server the purpose? (although overlays are a bit buggy -- they're not displayed when the unit is moving). See overlays=, [(remove_)unit_overlay].
Play a Silver Mage in the Wesvoid campaign.
Top

What about having "Hero Units" really have there own units like "Hero Mage Delfador" He would still be a Elder Mage but yet he would be in a way different...Or for example if you have a Knight for a "Hero" it would say "Hero Knight (Name)" maybe have a little different artwork like a different colored Horse or something to make it stand out so like in "Under the Burning Suns" You would send Nym to her death because you thought she was a regular Desert Hunter ....Just a thought....
Victory to those who do not fear death!
Top

That's the point of this topic. Making scenario-critical heroes graphically distinctive so you don't go sending them to their death.

Personally, I like Shadow's proposed "laurel wreath". How would it look in the game?
"Pure logic is the ruin of the spirit." - Antoine de Saint-Exupéry
Top

This is a really good idea. I like Quartex's and Shadows images. Either one of them could be used to mark them so that players know which units shouldnt die.

And this can be implemented through WML as Dave says. We could have a tag like IS_HERO that will put the shield or wreath image on the unit.

And to answer turin, about putting the image on the side opposite to the health bar, I think its good the way it is. Else it'd confuse between two adjacent units.
A warrior may die a thousand deaths,
An empire dies but one.
Top

I have changed it and aligned it right 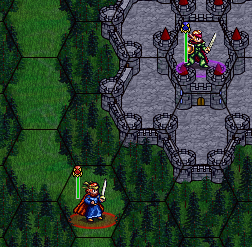 I'm not sure the wreath is distinctive enough. If I saw it I would say what is that. I'll see if I can make the shield work in-game and post back. I want to try a different-looking shield, though.
Hope springs eternal.
Wesnoth acronym guide.
Top

Here's mine. I think I'll use it until something official comes along. It came from the Grand Marshall. Critiques are welcome, but if it's on placement, prove it. I played with several locations before settling on this one. 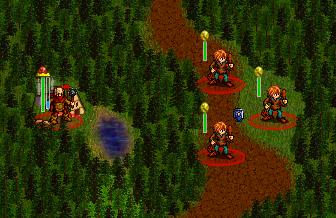 I don't know, that kind of confuses me on which unit it goes with, could it be just to the right of the orb?
Top

I'll try it. When you start moving the unit around, it's clear who it belongs to.
Hope springs eternal.
Wesnoth acronym guide.
Top

Here it is with the shield on the left. It's so big and not hollow that it doesn't work as well. I don't think there's room above the orb.

I also nudged the right-side shield over a bit so it doesn't get cut off.

Edit: Here's another position (#4). This one is pretty good - I don't know which is better. 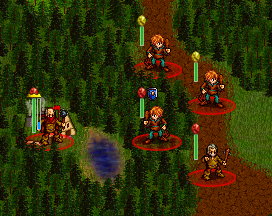 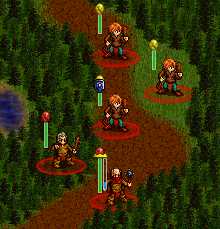 I preferred Shadow's laurel wreath - it's in keeping with the crown, works well on the left-hand side, and isn't more conspicuous than your main leader.

I just thought the black borders were too harsh on such a small image, and tried to soften those a little (although, I'm not a pixel artist

try it on a bigger unit, like the fire dragon. If it is to the right of the experience bar it will likely obscure a lot of the graphic. I would either put it at the top of the HP bar under the orb as you did in one of your examples, or to the middle left of the HP bar, not sure which without actually testing.
Top

I prefer a wreath-type solution but I don't think it's conspicuous or intuitive enough. It's hard to tell what it is or that it means something.

A smaller, better-designed shield graphic or another graphic altogether might do better.

Usually you're trying to kill the fire dragon, not protect one

The laurel wreath looks great.. but what about generals? They should have both, right (unless they are expendable, that is)? Perhaps a variation could be made which looks nice for regular heroes and non-expendable generals, alike. It would probably be better to change the colour, as well.
Top
Post Reply
33 posts