Forum rules
Before posting a new idea, you must read the following:
Post Reply
20 posts

I know Wesnoth is not realistic and I'm rather bad player, so I wouldn't suggest a change to default multiplayer. But I have question about a campaign monster: Why does the Giant Scorpion use mudcrawler's resistances? They make sense for an animated sludge but not for a scorpion. Compare that the Giant Spider (also an oversized arachnid) uses different movetype.
I did a forum search and found that the same idea was suggested before, but I didn't find any reasons against the change in that thread (only some rather good ideas what to change). The linked thread is from year 2008, but the scorpion still uses mudcrawler's movetype now (at least in 1.8, not sure about 1.9).
The change should not be hard to do as it doesn't affect default multiplayer. In the campaigns there might be problem that the scorpion would become harder to kill thanks to increased arcane and fire resistances. However, this would be counterbalanced by lowering its impact resistance (from current awesome 70%) as impact is more common than fire or arcane. Magi and orcish archers would still have an advantage over the scorpion as it hasn't ranged attack. (Another option would be decreasing scorpion's hitpoints to say 30)
My first campaign:
Inky's Quest - the Cuttlefish Campaign
Top

It does seem rather silly that a bug isn't killed by squishing.
You are a Dark Adept: you dimmerse yourself in the dark arts...potentially with great rewards....
-JW's personality quiz
Top

From eHow.com "How to kill a scorpion":

2. If you are wearing close-toed shoes and are not too afraid, step heavily on the scorpion and press your foot down, swiveling it to squish the scorpion.

3. If you are not wearing proper shoes or are too afraid to go near the scorpion, quickly find a large book or flat object and drop it on the scorpion.

4. Step on the book or object and twist and turn it to squish the scorpion.

5. Before attempting to pick up or discard the scorpion, make sure it is totally dead: sometimes they flatten but do not die.

So, impact attack is the recommendation at first glance, but it's really more of a crush attack (a la Wose), and anyway look at the force necessary to kill a normal puny scorpion. Dropping a book on it doesn't work. Even stepping on the book on the scorpion isn't quite enough - you have to twist it too. And even then it might still have 1 HP and be able to sting you! Scale that up to a giant scorpion, pictured below, and you can see how hitting it with a club might not do much. 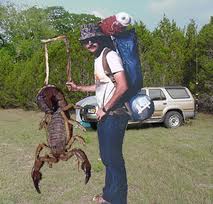 I have never killed a scorpion, but certainly cockroaches are impact-resistant, annoyingly so. Scorpions are in the Arachnida class, but they are armored like cockroaches, not soft-bodied like spiders. So I say Wesnoth is realistic, in this instance.
Top

1. WINR.
2. This is a very big scorpion, who's to say you always hit a vital organ in the first place?
3. Very big scorpions will have very thick carapaces*.
4. See Maiklas' post.

* Posh word for shell.
"What do you mean, "a dwarvish dragonguard with marksman is overpowered"?"

I think Giant Scorpions are fine as they are.
Top

elvish_sovereign wrote:I think Giant Scorpions are fine as they are.

QFT. And anyway, IIRC, they aren't even part of any multiplayer faction, and it's but the work of a moment to create a custom .cfg file to modify the unit to your specs for a campaign. Plus, if the unit's stats were changed significantly, campaigns that utilize the unit would possibly need to be re-balanced.
"I'm never wrong. One time I thought I was wrong, but I was mistaken."
Top

Maiklas3000 wrote:So, impact attack is the recommendation at first glance, but it's really more of a crush attack (a la Wose), and anyway look at the force necessary to kill a normal puny scorpion.

Exactly. It's not that the Scorpion is vulnerable to the impact damage type, it's that a person stepping on them is hundreds of times their size and applying so much damage that the damage type doesn't matter.

I imagine it would be very resistant to impact (say 50%), less so to blade and with pierce being most effective. It'd probably roast and freeze just fine too.

P.S. WINR, but there's a difference between realistic and intuitive. People take things like HMMA, and huge amounts of HP in their stride as part of the game abstraction. But if you violate their assumptions it can be pretty frustrating. For (made-up) example, if they recruit five bad-ass looking heavy infantrymen and find they die at the slightest tap of a fencer's rapier they'd be pretty irritated. (Conversely, it might be realistic for the Heavy Infantryman to need to visit a village to replace his armour every so often, but it wouldn't be intuitive in the context of Wesnoth which is simplified).

P.P.S. My P.S. Is bigger than my actual post. o_O
All things are true. Especially false things.
Top

QFT
My spritework can be seen here.

What is "QFT"?
All things are true. Especially false things.
Top

Quote for truth. And that's because it IS photoshopped. Or did you think four foot scorpions really existed?
http://thespaceinvader.co.uk | http://thespaceinvader.deviantart.com
Back to work. Current projects: Catching up on commits. Picking Meridia back up. Sprite animations, many and varied.
Top

As a demonstration of the author's point though, it really does work. I definitely would be running away from that thing. Not trying to squish it... not even a baseball bat methinks.
GambCiv | Tweet Tweet | My IRC Channel | Some of my projects
Top

running away from it (if possible with 2 legs against 8 ) would certainly kill the scorpion from starvation in the end.

their armor is made from chitin, which burns somewhat, doesn't it?
and also it might be bit elastic, therefore blunt resistance.
and they are quite famous for their cold resistance afaik.

their armor is softer than metal but rather smooth, might deflect arrows and spears reasonably unless well aimed (this might be defense rather than resistance).
nice armor piercing things like the pointed end of warhammer might work best maybe?
what would that be, impact-pierce?
or if i wanted to be really cruel i would probably hit their compound eyes with fire, they can't close them, right?
therefore, i don't think i see too much wrong with scorpion resistances in principle, maybe some are exaggerated.

as for all cold-blooded things in wesnoth, including saurians, it might make sense to give them some cold resistance, but imho it might make even more sense for cold attacks to cause slow on them.
campaign ruthless in your nearest 1.11 add-on server
some wesnoth-related drawings
Top

thespaceinvader wrote:Quote for truth. And that's because it IS photoshopped. Or did you think four foot scorpions really existed?

Although hard to see, the photo shows eight legs plus two pincers. That is the correct number.


homunculus wrote:and they are quite famous for their cold resistance afaik.

However, in Wesnoth they have -20% cold resistance. This needs to be changed, IMO. I think 70% would be realistic, but I would suggest 20% resistance and maybe -1 HP to compensate.


homunculus wrote:as for all cold-blooded things in wesnoth, including saurians, it might make sense to give them some cold resistance, but imho it might make even more sense for cold attacks to cause slow on them.

thespaceinvader wrote:Quote for truth. And that's because it IS photoshopped. Or did you think four foot scorpions really existed?

Although hard to see, the photo shows eight legs plus two pincers. That is the correct number.

He was referring to the length and using the Imperial(?) system of measurement.
GambCiv | Tweet Tweet | My IRC Channel | Some of my projects
Top
Post Reply
20 posts