[engine] show when a unit doing more damage than usual

Forum rules
Before posting a new idea, you must read the following:
Post Reply
23 posts

I agree that it would be helpful to new players to be alerted to damage modifiers. I would suggest simply revising the resistance table display and the damage calculation display to make the information more clear.

How it is now:

Here is my suggestion of how to improve these displays:

I've switched sides for some of the information to make it more logical. Notice the change in the column headings from "Attacker" and "Defender" to "Damage to Attacker" and "Damage to Defender". But the important thing is that I've replaced the "* 1.2" with "+20%" (and also the "* 0.8" with "-20%") to make it consistent with the leadership bonus and the Resistances table. To keep the sign consistent, I've negated the "resistances" on that table, which I've renamed "Attack Modifiers When Defending" to help avoid confusions. I've also eliminated the chance of being unscathed, since it seems redundant to the graphic.

The drawbacks: It will freak people out to see all these changes at once. You could introduce the changes gradually, but that would leave inconsistencies. The desire to show the vulnerability as +20% on the damage screen while being consistent everywhere translates into negating all the existing resistances (e.g., -20% becomes +20%), and some are likely to protest to having their world turned upside down. Noobs who don't even look at the damage calculation table will never see the information, but, well, they'll get to it eventually. Some confusion might arise from the use of red and yellow colors for two different meanings (damage modifier and expected battle result.) Perhaps different shades could be used or different colors chosen. However, there is some consistency as is: for both the attack modifiers and the results table, red indicates more damage than yellow, which indicates more damage than green.

Am I missing some reason that the damage calculation display was made so confusing in the first place?
Last edited by Maiklas3000 on August 14th, 2010, 2:54 pm, edited 1 time in total.
Top

And long may it remain that way.

One of my objections to adding a colour-coding system based on damage is that there are a lot of cases where low damage is as good as you get, and others where high damage is both expected and necessary. 2-3 points of damage to a ghost (from 5) might be worth doing, for example; against a drake, anything below 8 points (from 5) is perhaps too low. So you have all these colour-coded floating numbers, some red, some very red, some not, and - as you yourself accept - they don't necessarily have any great bearing on what's important. But if information is either not important or actively misleading, then it shouldn't be provided at all! No matter how this idea was implemented, I can't see how to prevent it being misleading in a small number of cases. But that 'small number' could be 10% of battles, and I think that's unacceptably high. If you have to learn the colour-coding on a case-by-case basis, (against ghosts, one minus or no symbol is generally good, but against drakes, less than one + is bad) then the indicator simply isn't doing what it's intended to.

The other objection is that you're also proposing introducing these flags at +0%-25% or +10%-30%. If you used 0%-25%, the presence of 0% within the trigger range guarantees that every single attack will have a damage marker symbol on it. That's definitely unneeded clutter. I was suggesting

Of course, with a wide damage range like that, you won't see it very often, so when you do see it, it could still be confusing, because it's unexpected.

Or you could do it by damage:

Which means heavy hitters like trolls will regularly see both extremes, while elves will rarely trigger it at all.

In conclusion, I just can't see how to make the idea work the way you want it to. Paladins vs zombies, and other equally extreme cases, fine. The remaining 90% of the game, meh. I don't think it flies.


Maiklass wrote:Am I missing some reason that the damage calculation display was made so confusing in the first place?

Historical reasons only, I bet. There are some good changes in that screen grab, and I'd like to see them applied.

As far as colour coding is concerned, perhaps we need to change the principle under which things are colour coded; use a rule of 'green is good' for the unit in question, and red is bad, and apply that rule consistently everywhere.

I would very much like to make the UI a lot more consistent throughout. All sorts of bits of cruft have built up over the years. I'd even go so far as to replace 'Resistances' with 'Weaknesses'. Then +20% means +20% damage, which is bad, so it's red on the unit weaknesses screen
Top

simons mith wrote: The other objection is that you're also proposing introducing these flags at +0%-25% or +10%-30%. If you used 0%-25%, the presence of 0% within the trigger range guarantees that every single attack will have a damage marker symbol on it. That's definitely unneeded clutter. I was suggesting

I meant that 0% would be unmarked, and anything above that would trigger a marker; only an idiot (thank you very much

:p ) would suggest that 0% isn't marked neutrally. The steps are grainy enough (you won't see many +1% (any!) damage increases in the game), because damage is given integers: for 5 dmg, a decrease or increase in damage is at minimum a 20% step.

When a player is presented with the quandary you have given ("Ghosts have tons of resistances"), it does not follow that they abandon that problem. That is not at all logical: just because you couldn't get better than sub-normal damage against a ghost wouldn't mean that you would give up on it. At this point, I think you will agree, the fact that ghosts have high resistances becomes a puzzle the player has to think about consciously (just as they have to now); the UI stops mattering, because the player is overdriving it.

Otherwise I agree with you on the historical baggage of the current UI. Turning "resistances" into "weaknesses" sounds like a great idea.

Huh, I got another idea: coding for damage given based on the base-HP of the damagee: if you bite off a big chunk off an enemy, that could be shown through floaties. So if you hit a Yeti with your peasant, it would be blue or gray or whatever: with a charging Paladin, red and twenty-billion exclamations marks.

side-note, isn't Wesnoth colour coding for damage already pretty unified? Green is for "good" and red is bad: yellow is just a shade of red, after all.

While I think there's some merit to your idea, I have some objections, the main one being that five levels is just too complicated to be useful. Try this: yellow* for weak, red for normal, bold red for strong. Adding background images might sound like a good idea, but I'd rather see the south attack animations our artists have meticulously worked over, not an orange ball, please.

I think "chance of being unscathed" may have been added as a reply to the newcomers who complain about missing so often. I rarely look at the Damage Calculations screen, so I don't have strong feelings about what's done with it.


* (or some other colorblind friendly hue)
“It is written in my life-blood, such as that is, thick or thin; and I can no other.” - J.R.R. Tolkien

When you choose unit and start to mousover on any terrain, you'll see color-coded defenses. It shown when player should choose "where to move unit". Color coding of damage should be used when player should decide "attack someone or not". For that purpose green-yellow-red colour cheme can be used, because noone can see healing at "choose your attack" screen.
On example, damage, dealt by mermen, is colour coded. "-37.5%" calculated as "real_damage/profile_damage*100%".
example: 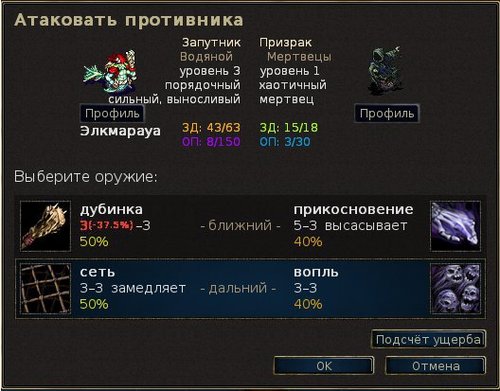 I think this is quite a good idea, except many of these suggestions are making it needlessly complicated. Wesnoth already has code for colouring numbers based off their value, so something like this could be applied to the damage floaties as well. Red would have to be the midpoint of the scale as it's already used in game, and fading to other colours makes little sense because Wesnoth usually uses different coloured floaties to differentiate different types of floaty (green = heal, red = damage, yellow = gold etc). I think damage less that the attack's base damage could be faded to black or dark red and damage higher could fade to white. That way even completely colourblind people would see a scale from dark to light, no extra colours are needed, and i think the scale would be fairly intuitive too.
I know that feedback about how effective my units were being would have been extremely useful when i was learning how to play Wesnoth, i would've gotten my head around resistances and such a lot faster, especially because i didn't really look at the damage calculations or even the attack window for very long when i was a noob (now I'm mostly a noob)

Sorry if I'm not doing something right, I'm not very good with forum protocols.

What usually gets me gasping, shouting and swearing is when something unexpected happens - that is, more than one strike against 80% defence value hits home, or Delfador fails to hit with any of his lightning bolts.

If you're into numberporn (a term introduced to me here) it could be fun (not necessary, not useful, just fun) to mark any successful blows after the estimated number with something, like bigger numbers, a louder sound, red colour, explosions or victory fanfares. Please do not note the last two. It'd make me ache even more than it is right now to see a skeleton whack 3 consecutive blows to my thief in a town, with a louder thump after the first. "Take that, b*tch!" It just hurts.

So yeah.
"Oh, to the hades with the manners - he's a complete [censored], and calling him that insults bastards everywhere!"
-Nalia De'Arnise
Top

Kraus wrote: If you're into numberporn (a term introduced to me here) it could be fun (not necessary, not useful, just fun) to mark any successful blows after the estimated number with something, like bigger numbers, a louder sound, red colour, explosions or victory fanfares.

Maybe it would useful to mark moments where the AI is unlucky this way, to counteract the cognitive bias. (Also where the AI hits much less than expected.)
Top
Post Reply
23 posts