Forum rules
Before posting a new idea, you must read the following:
Post Reply
79 posts

Naeddyr wrote:I'm still trying to figure out stuff, but here's something:

Slanting bars, no XP, though, just the blob and HP.

Maybe there should be options to chose between different styles of unit info?

non rectangles for filling are a little bit harder to implement, but probably doable with not too much work if there is a real belief that this is a GOOD THING. If one was to use the sides, then I would suggest putting the move indicator ball/whatever in the left corner, and have hp below it, and xp above it. If one really wanted extra balls to indicate hero status or defending rating you could put them in the other left corners. Way in the future, an ammo bar could be put on the bottom.

This is all theoretical at the moment, and I am not endorsing it. Let me just comment that for a good demonstration of what this looks like to convince us that it is worth doing, you will need to demo on more than one unit. Clutter doesn't look so bad if you have only one unit , but if you see it in the context of a small army (~7 units all clustered togeather, preferably of a variety of types and sizes) it will be more apparent if things are too cluttered. Also it is necessary to show such things in context to make sure that it is obvious that the indicators actually are obviously associated with the unit that they represent.

At this point, I am tempted to say that what is needed is a WML configurable unit_map_display which would give you all sorts of whiz bang features such as the ability to display unit WML variables that are not part of the normal unit status(like the aforementioned ammo bar). I am not sure that doing so is really a good idea (performance is always the question) and it is certainly not on my list of top priorities, so don't expect it before Christmas! Still, it would allow all the would be designers of the unit_map_display to actually test their ideas in game and distribute their resulting masterworks to others to test until a concensus of the developers on what should be done in the mainline is reached. Then, if you don't like the decision we make, you can still use your favorite version with appropriate mods to the cfg files and without having to recompile. Just a thought, not actually a plan yet.
"you can already do that with WML"
Fight Creeeping Biggerism!
http://www.wesnoth.org/forum/viewtopic. ... 760#131760
http://www.wesnoth.org/forum/viewtopic. ... 1358#11358

First of all, I really like this thread - healthy discussion and interesting ideas. I don't really want to be contraproductive, but I think you should really reconsider adding more information on the main screen. In my opinion only variables should be presented right at the unit, like present hp and xp. Defense isn't such a thing. It might change ofcourse when you enter a different terrain, but a unit has always the same defense on a certain terrain type.
What would be nice is that the present defense value shows if you select a unit and have the courser on it (very much like it is the case when you select a unit in order to move it some where and the defense value is shown at the location to be moved to) for the case one just lost sight of it.

I think a much better thing to do would be to make the present bars and bubbles more discreet without loosing information, i.e. the given information should still be recognisable at a glance, if that is possible.
The Clan Antagonist.

"Larry the Cow was a bit frustrated at the current state of Linux distributions (...) until he tried Gentoo Linux" - Free Software for free people.
Top

Golden crown for leader/general, silver for Don't Kill This One. No XP-bar. 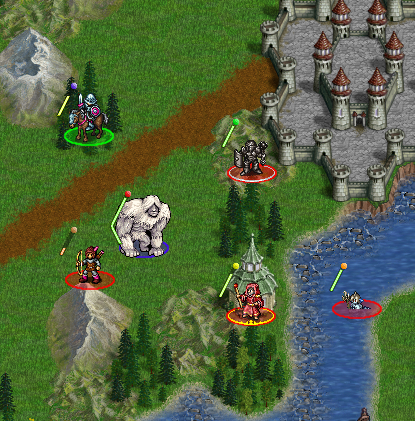 no these units looks too funny

I think the silver and gold additions to the ellipses are a very good idea. I think I could swallow tilted hit point bars if they were always straight, but I really don't like the bent HP bar for the yeti. The other thing I do find a bit off-putting is that with the bars at an angle, they look much more like they are part of the scene rather a game feature. It's as if there is a giant multi-colored mace hovering over each character, ready to smite them if they misbehave. Next thing, they'll be remarking on it in-character

Also, a suggestion on the colour of orbs - while the contrast is better in this version, how about using hollow and non-hollow orbs to indicate whether a unit has attacked? Then the colour-coding part can be used purely for movement information, and that would mean red, yellow or orange, and green would be sufficient.
Top

Feel free to PM me if you start a new terrain oriented thread. It's easy for me to miss them among all the other art threads.
-> What i might be working on
Attempting Lucidity
Top

Except if you force the crown even if there are no ellipses. And there could be a dark border version for yellow and white.
Top

I don't remember ever playing a scenario that used yellow and white teams. What are they, teams 8 and 9? Besides, there was talk - in some other thread I read recently but I can't remember where - of making ellipses constantly active for some units.
Top

Golden crown for leader/general, silver for Don't Kill This One. No XP-bar.

I really like the ellipse idea, but I don't like the slanted hp bar at all here.
The Era of Myths
The "How to Play..." series
Second draft.
Top

I like the idea behing the Hp bars, in getting them out of the units face and off to the side. But there is still the problem of the people who don't use ellipses. Me for example, they make the game feel more cartoony, or flat for my taste.
I am Oreb, Lord of the Darthien
Give your comments to the World of Orbivm
Top

The bars could also be curved along the hex borders, which makes them obstruct even the largest units very little. The XP bar could be put on the right side in a similar manner.

Feel free to ignore how I positioned the leader crown in this one, I just had to put it somewhere. Incorporating that into the ellipse in some way sounds like a good idea (I don't really fancy the latest proposal though).

zookeeper wrote:The bars could also be curved along the hex borders, which makes them obstruct even the largest units very little. The XP bar could be put on the right side in a similar manner.

Those look good.
The Era of Myths
The "How to Play..." series
Second draft.
Top

IMO, bars that aren't straight aren't a good way to display a units HP at a quick glance. I also just don't like them. Something about the bars extending out seems aesthetically displeasing.
Top

Dragon Master wrote:IMO, bars that aren't straight aren't a good way to display a units HP at a quick glance. I also just don't like them. Something about the bars extending out seems aesthetically displeasing.

Ditto.
For I am Turin Turambar - Master of Doom, by doom mastered. On permanent Wesbreak. Will not respond to private messages. Sorry!
And I hate stupid people.
The World of Orbivm
Top

It seems there is not enough resolutoin on the bars to have them look like well rounded dials. Thus, though a cool and fine idea, i don't think it could work.
Cuyo Quiz,where madness meets me

Turn on, tune in, fall out.
"I know that, but every single person nags about how negative turin is; it should be in the FPI thread "Turin should give positive comments" =)"-Neorice,23 Sep 2004
Top
Post Reply
79 posts